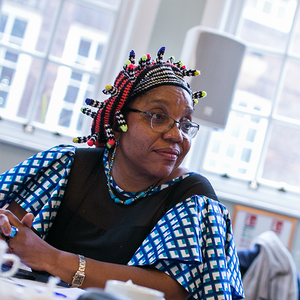 Esther Omam is the Executive Director of Reach Out Cameroon. She has been at the forefront of mediation and development issues in the South West Region with Reach Out Cameroon since 2000. Esther has created the movement called South West/North West Women Task Force (SNOWT) with more than 150 members to contribute to ending the current crisis in the two Anglophone regions of Cameroon. She was called to equally facilitate the creation of the South West Women Peace and Development Network and given the position of 1st Vice President for Peace and Development. Her focus has been on empowering vulnerable and marginalised populations for improved livelihoods through economic, social and cultural empowerment.

Esther is currently coordinating humanitarian activities within her organisation in the South West and North West Regions and is supporting more than 350,000 Internally Displaced Persons (IDPs) in several hard to reach communities in both regions. Esther was amongst the first civil society leaders to respond to humanitarian needs of IDPs in The Restive regions of North West and South West, as with COVID-19. She has been advocating for women’s rights so as to curb the rate of gender-based violence in conflict-affected regions and nearby regions. This work earned her a prize from the Canadian High Commission on the Promotion and Protection of Women in Cameroon. She leads women in pre-consultative talks in preparation for the Major National Dialogue. She has been mediating between government and leaders of Non-State Armed Groups, a role which lead her to the USA to meet the leaders of the NSAGs for talks. She now serves as a member of the United Nations Women Civil Society Advisory Group in Cameroon and a member of the Consultative Group of the UNESCO RELY Project in Cameroon. Esther recently attended United Nations Security Council Arria- formula meeting in May 2019 in New York where she presented on the Humanitarian Crisis In Cameroon: The Impact of the Crisis on Women, Children, Health and Humanitarian Access.