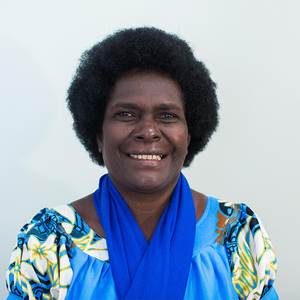 The Pacific and Australasia

Rose Pihei has been working to empower women since 2003, and has been actively engaged in peacebuilding work since 2006, when she pioneered the umbrella women's organisation now formally known as the Bougainville Women's Federation. In 2010 Rose was elected as member for South Bougainville Women, and was allocated as the Minister for Community Development. Rose initiated the National Action Plan on United Nations Security Council Resolution 1325 (Women, Peace and Security), which was adopted as a government policy in 2013, and merged with Women's Empowerment and Gender and Equality. Alongside the WMC, Rose is also a member of the Technical Working Group on Women Peace and Security. At present, she is continuing to negotiate and mediate conflicts in the Konnou Peace Building initiative supported by Nazarefh Centre for Rehabilitation. Prior to 2003, Rose worked with the Bougainville Administration and developed a small business providing Secretarial services, which enhanced her to begin her work towards women's empowerment. Rose also holds a certificate in Stenigraphy.